3 Pitfalls to Selling Your Business 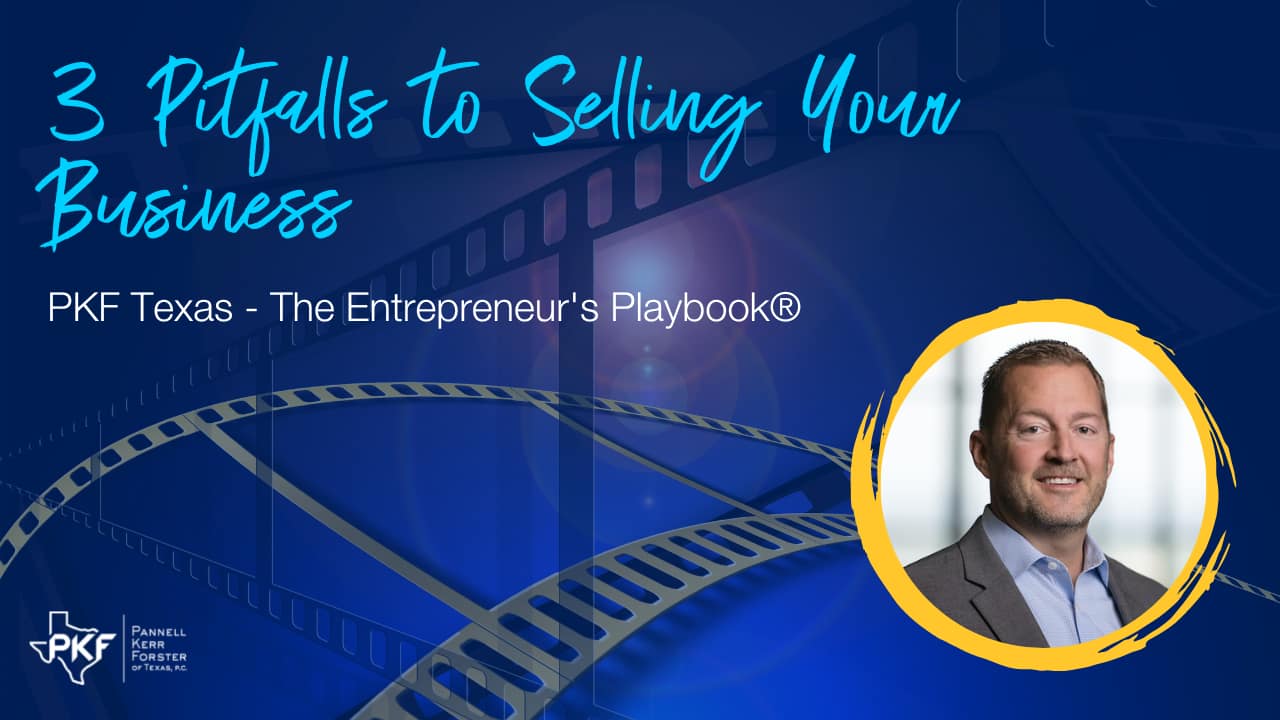 You probably know the benefits of selling your business and how to do it effectively, as well as proactively, but have you thought about potential pitfalls? In this episode of PKF Texas – The Entrepreneur’s Playbook®, Jen Lemanski discusses with Audit Director, Chris Hatten, three pitfalls to watch out for.

Jen: This is the PKF Texas – Entrepreneur’s Playbook®. I’m Jen Lemanski, and I’m back once again with Chris Hatten, an Audit Director and one of our Approachable Advisors™ here at PKF Texas. Chris, welcome back.

Chris: It’s a pleasure to be back.

Chris: Well, I think there’s a bunch, but if I had to limit it to three, I’d probably say… and I’m more so speaking as far as things to be looking out for as far as pitfalls.

And so, I guess going back to the first one. Obviously, if somebody calls you up and says, “We’ve been researching your company. Do you have any interest in selling? And would you mind sending along financial statements?” And you say, “Well, I haven’t closed them out in the past couple months. Give me a few weeks and let us get caught up.” Obviously, that’s not a good look for you, not a good look for you or for the business, because they might interpret that as a reflection of how you’ve been running things historically.

So, again, these private equity groups, they’re always looking at hundreds of deals per year. And so, if you say that it’s going to be two or three weeks before you get caught up, they’re moving onto their next deal and they’re scoping that one out, and you’re getting put to the back burner potentially.

Who to Get Involved in Selling Your Business

Jen: You mentioned getting advisors involved, obviously, we want accountants, attorneys. And what does that look like?

Chris: You should already have two of those engaged at this point, even before you’ve been approached by somebody and that’s going to be your attorney and your accountant. You may not be having a financial statement review or audit done, but you’re having your tax return done every year. And so, hopefully you’re going to have those people on hand already.

As far as the accountants, ideally, if you’re getting approached about selling your business, you want to have an M&A attorney. You have a lot of generals out there, but when it comes to selling your business, you want somebody who knows what to look out for as part of the sales transaction. And then as far as your accountants, if you’ve been going through a reviewer audit, they’ve probably been doing a good job of kind of keeping you down the straight and narrow, as far as GAAP financial statements, up to speed with the latest accounting pronouncements.

But from the tax perspective, at the end of the day, you want to maximize your take home. And so that’s where your tax accountant’s going to be able to come in and help you identify how to get the deal structured along with your M&A attorney. But they’re also going to be able to run models and say, “You’re going to make X, Y, Z. This is what you should be able to anticipate coming home so that you can then determine whether or not that’s going to suit your lifestyle after the transaction.”

Jen: Perfect. Well, we’ll get you to come back and talk a little bit more about transaction-related items. Sounds good?

Chris: We can do that.

Jen: Perfect. This has been another thought leadership production brought to you by PKF Texas – The Entrepreneur’s Playbook®. For more information about this and other topics, visit www.PKFTexas.com. Tune in next week for another chapter.