Why Sell-Side Due Diligence Helps Sellers 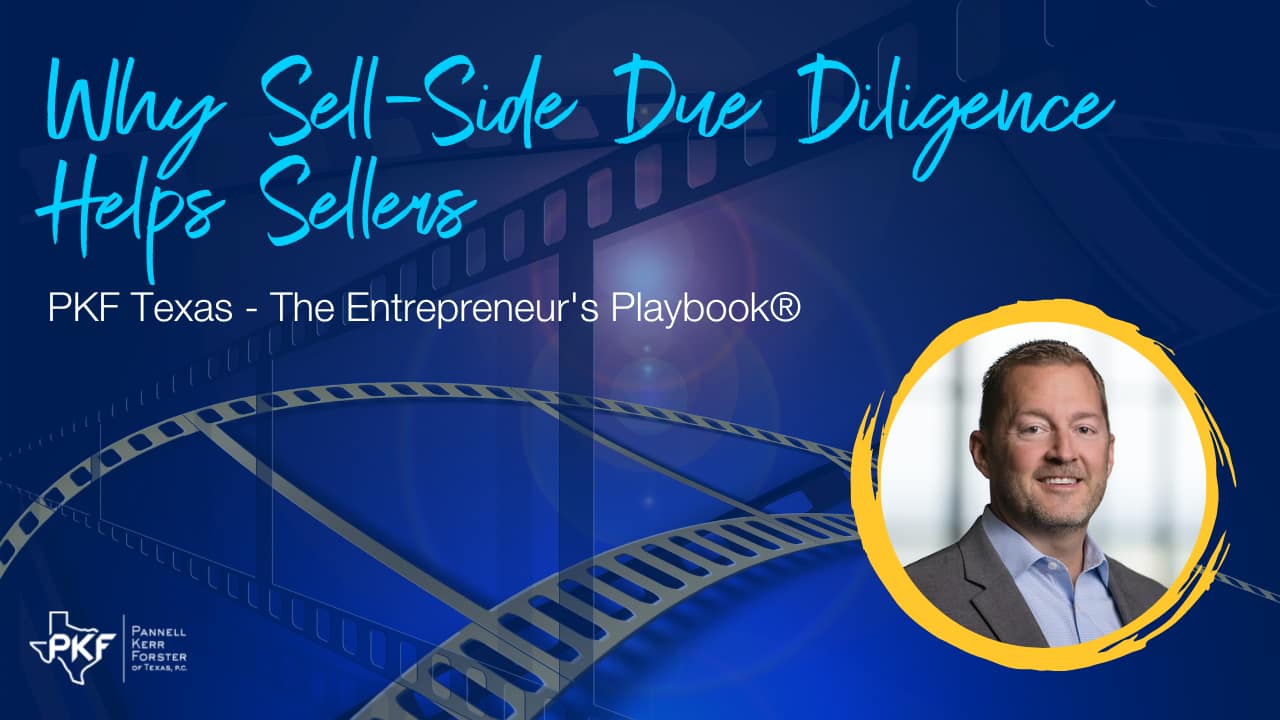 Think of sell-side due diligence like car maintenance. We’re the mechanics taking a look under the hood of your business. Why is this important? Audit Director, Chris Hatten, CPA, CVA, CM&AA, goes into detail in this episode of PKF Texas – The Entrepreneur’s Playbook®.

Jen: This is the PKF Texas – Entrepreneur’s Playbook®. I’m Jen Lemanski and I’m back again with Chris Hatten, an Audit Director and one of our Approachable Advisors™ here at PKF Texas. Chris, welcome back.

Chris: It’s great to be back.

Jen: So, transactions, there’s all sorts of things on both buy-side and sell-side. So, how do you use sell-side due diligence to help a seller through a transaction?

Chris: We’re like the equivalent of a mechanic. If you’re taking your car into the shop, we’re the person who’s going to be there to help you take a look under the hood. And so again, you mentioned sell-side or buy-side, but as far as the sell-side opportunities again, we’re going to take a look under the hood. We’re going to determine whether or not things are running like they should. And usually that doesn’t result in a complete overhaul. Maybe it’s just keeping up with making sure the oil change has been done. The belts might need tightening.

And so, what does that mean to the financial statements? That’s where we’re going to take a hard look at the balance sheet and the income statement. So again, are the financial statements being kept on a GAAP basis? Are the accounts being reconciled accurately? It’s going to be a lot of heavy lifting in those areas. Is accounts receivable being maintained? Do you have old balances there? Obviously, you don’t want that because as part of a transaction; they might start throwing out amounts that have aged excessively.

And so again, that’s where we look under the hood. Then after that, I say that it’s more so looking at dents and scratches. And so again, that’s maybe taking a look at the reconciliations from a higher level. Something else that might be involved would be taking a look at internal controls. You know, at this point we’ve already hammered out to make sure that the financial statements are correct.

So, we’re kind of just tightening things up a little bit. And some of that could be consulting with Management on getting them on board with getting a transaction done. And then finally, I would say is probably it’s just cleaning things up and making sure everything’s looking pretty.

The Last Steps of Sell-Side

Jen: Kind of doing that polish.

Chris: Yeah, polish. And so, if you’re going out and buying a used car, you’re taking a mechanic with you and they’re going to take a look under the hood. You know, the dealership’s always going to make sure everything’s looking good on the outside, but it’s the inside that we’re worried about. But then that last step is making sure that everything is looking good from the outside. And so, some of that may be working with the seller doing some type of budgeting that they might not have been keeping up with before.

Some of it could be some different projections or just working with them on if you were to continue to run the business, what would you have been doing to sit there and continue to grow this? What you want to do is you want to be able to take it to a perspective buyer and show them that there’s still some meat on the bone so that they’re not buying a company that’s already been maxed out. They want to see what it’s going to look like when they start investing more of their money into it and what they’re able to do with it.

At the end of the day, again, it’s making sure that everything is looking pretty, but when we take this out of the shop, we want to make sure that that it’s running and that it’s able to keep running.

Jen: It’s not going to die when you get to that first stoplight.

Chris: Exactly. We want to make sure that everything’s going to continue to operate and function so that as you’re going through that sales process, there’s really no more hiccups that could potentially come up.

Jen: Perfect. Well, that sounds like a lot of great information, and we’ll get you back to talk a little bit more about some other transaction-related topics in the future. Sound good?

Jen: This has been another thought leadership production brought to you by PKF Texas – The Entrepreneur’s Playbook®. For more information about sell-side due diligence and other topics, visit www.pkftexas.com. Tune in next week for another chapter.