4 Advantages of Working with Investment Bankers 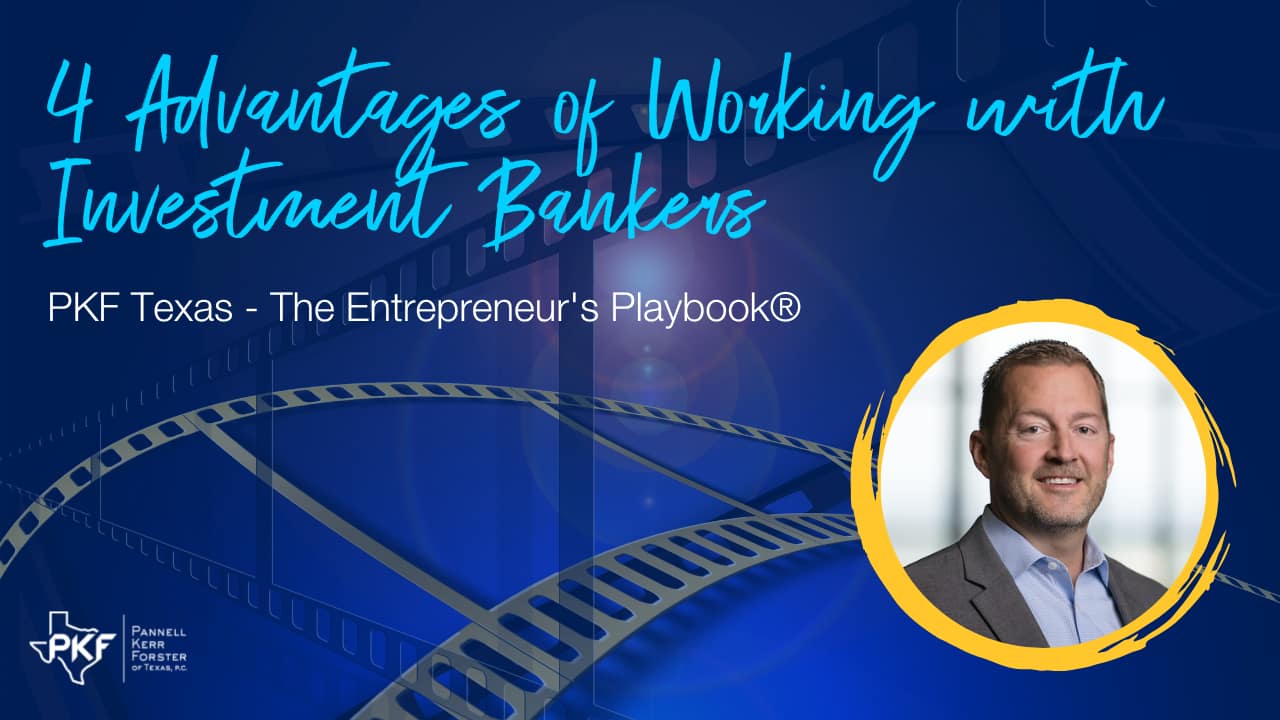 There is nothing wrong with selling your business on your own, but in order to maximize the benefits of landing the best deal, you might consider working with professionals, such as accountants, attorneys, and investment bankers. For this episode of PKF Texas – The Entrepreneur’s Playbook®, Audit Director Chris Hatten, CPA, CVA, CM&AA, shares the advantages of working with investment bankers to bolster the transaction process of selling your business.

Jen: This is the PKF Texas – Entrepreneur’s Playbook®. I’m Jen Lemanski, and I’m back again with Chris Hatten, an Audit Director and one of our Approachable Advisors™ here at PKF Texas. Chris, welcome back.

Jen: So, we talk a lot about transactions and things, and we’ve talked about having attorneys involved, having CPAs involved. What about investment bankers? Are they really necessary to a transaction process?

Chris: This is their wheelhouse – going through the transactions, taking companies through the sales process. So, that would probably be the last of my recommendations is trying to fly solo on selling your business by yourself. Obviously as somebody who’s selling their business, you want to maximize the cash that you’re hopefully going to get in as part of the sales transaction. And they go through something called an auction process or a sales process, and they’re going to try to bring as many potential investors to the table as they can and get them bidding against each other, which is in turn, hopefully going to drive up the sales process.

So, in that regard they’re helping you maximize your value. And again, they’ve done this several times before. They have the prowess in this area. And so similar to, let’s say a sports agent, they know where– if the buyer is pushing back on certain areas where they can potentially reach out and then get you some extra nuggets over here to make sure that you’re willing to compromise, but then also you’re going to take from this side. So, they’re great at that.

And then also they’re going to understand what you’re wanting to do after the sale of the business. Some people want to sell a business and be done with it – ride off into the sunset. Some business owners are willing to stay in and roll their equity and then potentially stay on for a couple years. And so, them understanding that they can kind of weed out some of the potential buyers, because if you’re saying you’re out, “I’m done,” then that’s going to totally exclude a certain segment of the buyers. And so that’s where they add a lot of value.

And then again, at the end of the day, they don’t have the emotional attachment to the business. And so, you don’t want to be sitting across from somebody as the seller and they give you what you would term an insulting offer. And then your face starts turning red, and it becomes personal. They don’t have a dog in the hunt except for they do want to make you the most money that they can.

And so, they’re going to sit there and actually take some of those initial lumps for you and be able to push back and then start bringing you the offer similar to a real estate agent. So, that’s where you can get a lot of value from having an investment banker to again, maximize your take home.

Jen: Perfect. Well, that sounds great. And we’ll get you back to talk a little bit more about some other transaction-related items. Sound good?

Chris: We can do that.

Jen: All right. This has been another thought leadership production brought to you by PKF Texas – The Entrepreneur’s Playbook®. For more information about investment bankers and other topics, visit www.pkftexas.com. Tune in next week for another chapter.