Fossil Fuels and Renewable Power – What’s in the Future? 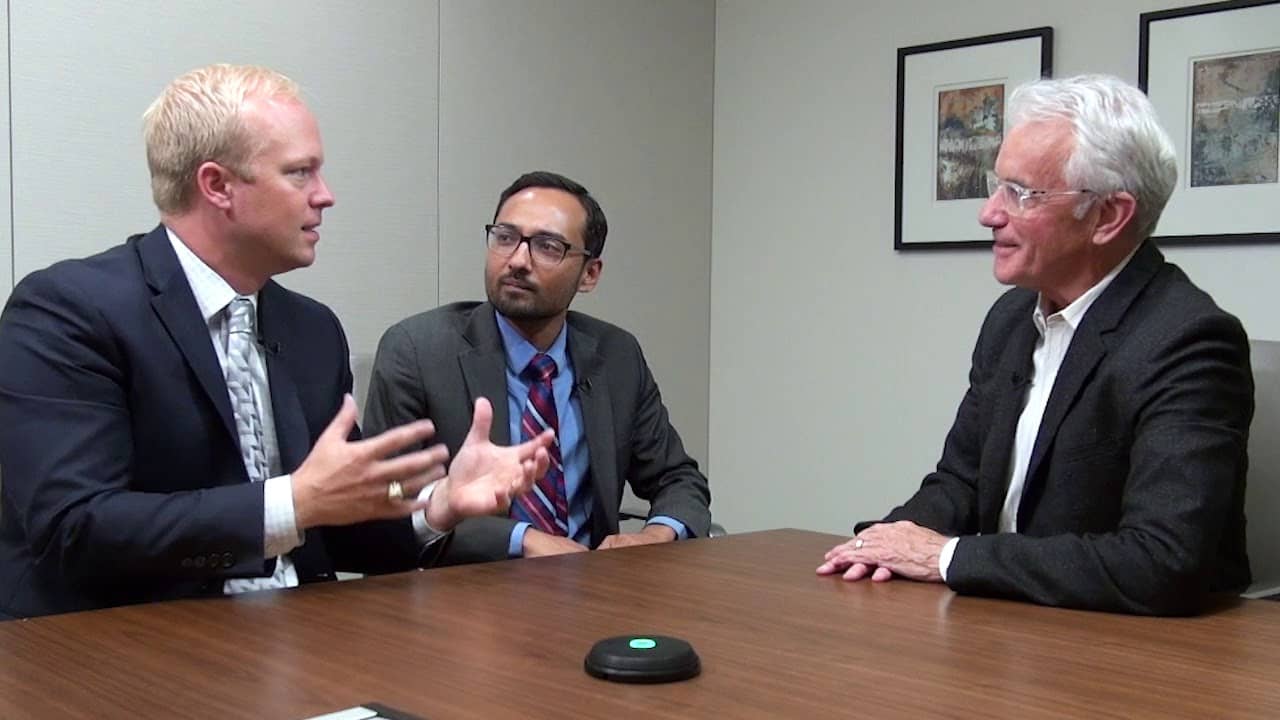 Russ:  You bet.  Give us an overview of Wood Mackenzie.

R.T.:  Wood Mack – we’re part of a larger corporation called Verisk Analytics.  It’s a data analytics company focused in the insurance, energy and financial services sectors.  We’re part of the energy vertical.  So Wood Mack we describe as part of the energy metals and mining, really the natural resources value chain.  I’m focused in oil and gas; Prajit’s more focused on the power and renewable side, and we’ve expanded quite a bit there over the last few years.

Russ:  I remember hearing and seeing that about a year ago, too; I thought it was interesting.  To me it was more of an indication that the renewables were gaining ground these days.  So before we get to renewables, why don’t you give us an overview, R.T., of where oil and gas is today and in the immediate future?

R.T.:  Well Brent’s over $70, today at least.  It’s holding there; I think that’s a good price for most operators.  I think most operators would have been ecstatic about something like that a year or two ago.  I’m not sure that everybody believes there’s a firm foundation there.  I mean, WTI is a little bit less; we’re seeing differentials a little bit higher in West Texas.  West Texas is driving U.S. growth, so from a headlines perspective, and what you’re seeing in the Permian, maybe some of that Permian growth is going to come into question this year but it’s still growing strong.

We’re still going to see supply grow by quite a bit this year; the question becomes where do oil prices settle?  What do companies need to plan for?  We joke that most companies would say just tell us the price and we can plan at that price, it doesn’t matter if it’s 30 or 100 – at least I’d know what I’m working with.  Some of this volatility makes it harder, but higher is generally better for most of the operators, better for Houston, and probably really good for the Texas labor market; we’re seeing that in the statistics.

Russ:  So you two guys kind of probably overlap a little bit, because you both sort of look at the power space, do I have that right?

R.T.:  We probably fight a little bit; he’s on the power side, I’m on the oil and gas side, but we go back and forth.

Russ:  Well, tell us about renewables.  You hear stories all the time about them gaining traction and stuff, but we also live in the era of fake news. So who do you believe?

Prajit:  And there’s a lot of it but here are the facts: renewables costs have fallen drastically.  And when we say renewables we’re talking using solar and water and wind.  The costs of all of these technologies have fallen anywhere between 30% to 80% in the last six years, and we’re sort of beyond the point where I think if you looked at renewables trends a year back, there were still question marks around is it competitive with fossil fuels, is it getting there; we’re way beyond that point right now.

Prajit:  They are cheaper than fossil fuels without tax credits or any sort of incentives.

Prajit:  Without subsidies and there’s a lot of drivers that will keep reducing these costs going forward.  But again it’s not just about costs going forward, there’s a lot of other things happening at the same time.  Because renewables are getting cheap, there’s this idea that if you want to reduce carbon emissions or have a sustainable goal in the future, you could essentially electrify every single energy end user you can, which is transport – electric cars – and the whole point of electrifying is that you electrify that, and in an indirect sense you’re running everything as much as possible through renewables.  At least that’s the goal, but how we get to that, whether it’s feasible or not, that’s a whole other question.

Russ:  Well, isn’t there even a grid challenge, though, if transportation was suddenly hugely driven by electricity?

Prajit:  One of the questions I commonly get is, “Can the grid handle all these electric cars?”  And the answer, like many other things, seldom is binary – there is no yes or no.  One example when you try to answer this question, you really have to ask yourself, “Well how fast are you charging the electric car?”  Because it makes a whole lot of difference.  And the way this makes a difference – we’re in Houston so let’s think about Texas – the grid in Texas is called ERCOT.

Say there’s about 11 or 12 million cars in the ERCOT territory. You could argue you can get someone who believes in electric cars, and they can say the 11 million cars at some point will be electric, whether it’s ten years or 15 years or 50 years.  But the important point is if you charge the car across eight hours, which you do right now in San Diego and California and other areas, then the grid does not have any issue.  But if you charge the car in five minutes, then you have huge issues, massive issue.  So that’s why there’s no binary answer.

R.T.:  And five minutes is about how long it takes to fill up your tank with gas, so that’s a comparison.

Prajit:  So do you guys get together and compete and debate ever on these issues?  Or do you think he’s going to take over at some point?

R.T.:  We have lively debates, and I think that’s one advantage of Wood Mack is we’re two of 600-ish analysts. So we have opinions on just about every issue, and we think we’re all right, so we get to battle it out behind scenes or behind the curtain, I guess, to some extent.  We have to put together a coherent view, and one thing that I think we see from an oil and gas power and renewables perspective – metal and mining as well, because you have precious metals going into – or scarce metals that are going into batteries that are very important in what you believe about the use of storage – we can put the whole picture together.  So that’s the perspective that we think we offer that maybe others can’t quite, because maybe they’re just purely renewables focused or purely oil and gas focused.

Prajit:  And the one area that I think Wood Mack is unique in its perspective due to R.T.’s point is the worlds are two different ecosystems; there’s the oil and gas world, and then there’s power and renewables and technology players – especially the technology players.  They speak completely different languages, and these two worlds have collided; the whole point is that you need to build sort of a common vocabulary that both sides understand, because you hear a lot about grid resiliency. Can the grid take it?

On the other hand, I don’t think technology players quite appreciate legitimate issues – fake news aside – that you have to consider and you have to plan this through.  On the flip side, I think folks who focus more on grid issues and the liability issues don’t understand how fast technology is changing; battery storage is, as he just mentioned – I’ll just give this one example that makes a point – so the EIA, the Energy Information Administration, did this forecast.  They were trying to forecast battery packs that go into Tesla cars and electric cars in general.

So they were doing these different scenarios around that and in the most aggressive of scenario – they did this back in 2012 – so they did this forecast for battery packs, but here’s the punchline: the cost that they were predicting would happen in a high, aggressive scenario by 2030 has already happened.  This technology is 20 years ahead of its time.  And that’s why I think everyone’s just sort of taking a bit of time top sort of absorb this and what this all means.

Russ:  But isn’t natural gas still very inexpensive and almost getting cheaper in the power grid?

R.T.:  Absolutely, there is one of our points of contention.  Solar has been very hard to scale in terms of it comes online at the same time, so regional you can add so much and then you start to create problems.  It mixes very well with natural gas; it maybe doesn’t mix as well with something like nuclear that is constant.  And that’s me as an oil and gas guy venturing too far into power, but those are the types of discussions we have, and that’s what we’re trying to figure out: what really happens.  Because it probably isn’t the extremes of maybe the oil guy that says EVs will never work or the technology person that says well batteries are going to fall to $1,000.00 a car and everybody will have one.  It’s neither one of those, and so it’s working out what’s most likely.  And then some of the fun part is how do we really back into what consumer behavior will be?

R.T.:  What will people really adopt?  What will policy be?  What really drives the uptake?

Russ:  Also, before I let you guys go, you both participated in the Gulf Coast Regional Family Forum. How did you feel about that?

R.T.:  It was a good experience.  I got to host the panel of experts that it’s always good to make those connections every year, a couple of familiar faces.  But private equity experience, private operator experience, midstream banking… it’s different coming out of the downturn that’s for sure.  And the way everyone’s looking at opportunities and also how the investor pressures have changed.  A lot of these U.S. companies anyways, my focus, were growth-oriented, and now that’s shifting; shareholders want money back.  It’s a different day in oil and gas in the U.S. for sure.

Russ:  What was your perspective on it Prajit?

Prajit:  Echo everything R.T. said.  In addition to what he said, what I really liked about it was the audience. There was not just private equity players; there were some folks in the government.  And a lot of what I talk about is transition in energy, and there’s so much uncertainty and all that, but the fact that everyone’s sitting in a room discussing these ideas, thinking about how Houston should adjust to those ideas if they need to, is quite exceptional in my view.

Russ:   Great.  Well once again thanks a lot to both of you.

Russ:  You bet.  And that wraps up my discussion with R.T. Dukes and Prajit Ghosh with Wood Mackenzie.  This has been another Thought Leader production brought to you by PKF Texas Entrepreneur’s Playbook.