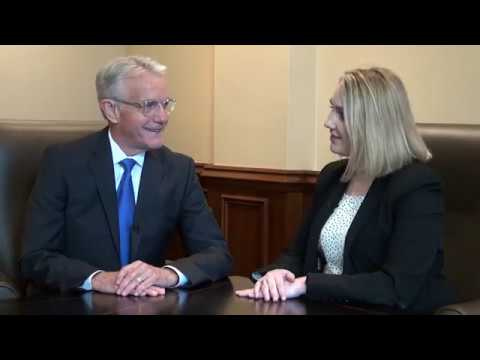 Jen: This is the PKF Texas Entrepreneur’s Playbook. I’m Jen Lemanski, and I’m coming to you from the Gulf Coast Regional Family Forum. With me today is Russ Capper, Executive Director of Houston Exponential. Russ, welcome to the guest side of the Playbook.

Jen: For our viewers who aren’t quite familiar with Houston Exponential, can you share a little bit about what that is?

Russ: I’d love to. Houston Exponential is a non-profit initiative put together by the Greater Houston Partnership and, really, the Mayor and the City Council. They both seemed to come together simultaneously and felt like, “My goodness, we have to do something that really champions our innovators and accelerates the growth of our innovation ecosystem,” meaning, trying to make Houston more fertile for development of digital technology startups.

Jen: What kind of projects do you guys have to help drive that digital innovation?

Russ: For Houston Exponential, we sort of overlay all of the initiatives that are in existence today – like Station, like The Cannon, TMCx – and there’s really a whole bunch more, and there’s co-working spaces. We coordinate and help them all, because they are key to our success. Plus, we pursue and try to find entrepreneurs that are not part of those incubators and accelerators, and we think there are a whole lot of them.

Jen: That’s fantastic, because we’re kind of not as well-known as we should be for our startup stuff. I know there’s a lot of innovation going on in the energy sector and health care. You guys touch all of that and more, right?

Russ: Absolutely. What really motivated this a lot is that we continued to be rated real low amongst these surveys that really analyzed cities for their future and how strong they are in innovation. I personally believe that Houston is the most innovative city on the planet. When you look at NASA, you look at the domed stadium, you look at the cardiology history, I mean, we’ve just done it all here. But it is true that we haven’t really done well in digital tech innovation, software. It’s also true, if you look at cities like Austin, like Palo Alto, like Seattle, it is accurate to say that if you have a digital innovation tech center that’s really active, it really spurs growth, more than any of the other sectors do. That’s why we’re doing it.

Jen: The theme for this year’s forum is Shifting Paradigms, and I think this innovation really fits right in. What are you guys seeing as a shift of paradigm in the innovation ecosystem in Houston?

Russ: I’ve been part of the innovation ecosystem in Houston for many years, a couple of decades even, and boy, there is a paradigm shift. We seem to know so much more about what kind of activity within the city really seems to stimulate growth. It seems like, number one, putting them together in a proximity, which is hard to do for a city our size, but there are several pockets of innovation. There’s the new Innovation Corridor where Rice University is developing the Ion, which is going to be very exciting.

Jen: It’s super exciting. I’ve seen some of the schematics for that. It looks really cool.

Russ: It’s unbelievable. That certainly is going to help, too. In the old days, that didn’t matter that much. Now, it seems to matter a lot. Also, this isn’t necessarily a paradigm shift so much as it is a recognition that our city, Houston, Texas, did not have much venture capital. We have plenty of capital here, just given the city’s history, so much of it was invested in real estate and oil and gas. We have an initiative, what we call the HX Venture Fund, which is really based on a model of fund of funds that tends to attract venture capital from all around the country. That’s a major Houston paradigm shift, for sure.

Jen: That’s really cool. Now, say someone wants to get involved. You’ve already mentioned the website, which I know exists now but then will be more robust. Investors, somebody wants to potentially volunteer, what opportunities are there for people to get involved with HX?

Russ: We were launched in the very beginning with a massive group of passionate volunteers that spanned 14 different committees. Today, we’ve sort of consolidated that, and now that we have an HX staff and team, it’s become a little bit different – we have fewer ones. I would say pay attention to our new website, which will be at our URL that exists today, houstonexponential.org, and we’re going to have a place for people who are really interested in knowing what’s going on and in helping us.

Jen: Perfect. Well, thanks, Russ, for being here.

Russ: Thank you for having me.

Jen: I appreciate it.

Jen: And that wraps up my discussion with Russ Capper, Executive Director of Houston Exponential. This has been another Thought Leader Production brought you by PKF Texas – The Entrepreneur’s Playbook. Tune in next week for another chapter.