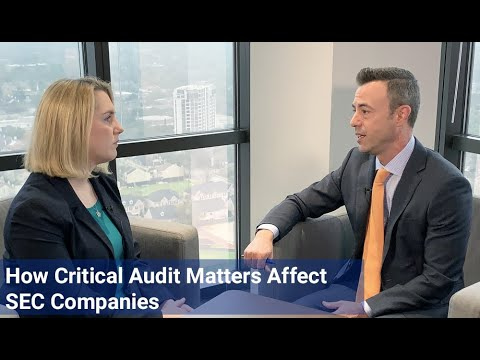 Jen: This is the PKF Texas Entrepreneur’s Playbook, I’m Jen Lemanski and I’m here with Ryan Istre, an audit director and one of the faces of our PKF Texas SEC team. Ryan, welcome back to the Playbook.

Ryan: Thanks for having me Jen.

Jen: So, I’ve heard you guys on the audit side talk a little bit about CAMs, what are they and how do they affect public companies?

Ryan: So, a CAM is defined as a Critical Audit Matter. The PCAOB issued an amendment to AS 3101 which is the literature that governs what an auditor is required to include in an audit opinion of public companies. So the amendment actually adjusted what will be now seen in public company audit opinions.

Jen: Okay and now what qualifies as a CAM?

Ryan: So, a Critical Audit Matter is any matter arising out of the audit of financial statements that affect those statements or the disclosures that require significant auditor judgment because of the complexity of the nature. And the other part of the definition is that these items were either discussed with the audit committees or are required to be discussed with the audit committees.

Jen: So, it really sounds like something that the auditors focus on, what is it really means for the public registrants then?

Ryan: So, you’re right, it is the auditor’s ultimate responsibility to include what they believe is a CAM in their audit opinions. And just as a quick side note, the SEC has issued lots of staff guidance directing auditors what could or could not qualify as a CAM. The part where the public company management and audit committees come in, is that because most of this is effective for our public companies for 2020, for the size of public companies that we work with, the audit opinion is going to be different and the auditors are responsible to include that information in those opinions, but management and the audit committees of those public companies clearly don’t want to be blindsided with information that they were not aware is going to show up in their financial statement for the current year. But the good part is, is that the PCAOB has suggested using 2019 as a dry run year so companies generally have a general core business year to year outside of random transactions that may occur.

Ryan: But with the PCAOB is suggesting that 2019 to be used as a dry run year to show what could or could not be included in those opinions In the future for example.

Jen:  So, that way they really kind of know what potentially could be coming to them?

Ryan: Definitely, always important to be prepared and to be on the lookout for these new CAMs.

Jen: Thanks Ryan, we will get you back to talk a little bit more about items relating to public companies, sound good?

Jen: For more information about SEC related topics visit www.PKFTexas.com/SECDesk. This has been a thought leader production brought to you by PKF Texas the Entrepreneurs Playbook. Tune in next week for another chapter.