The Importance of Finance and Development Collaboration 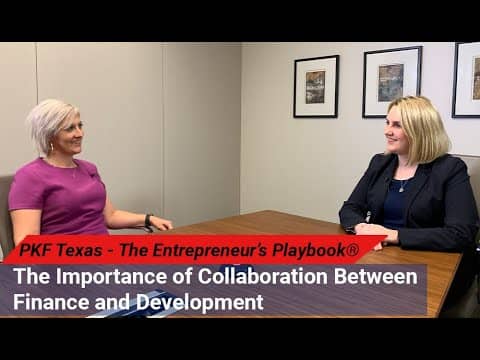 Jen: This is The PKF Texas – Entrepreneur’s Playbook®. I’m Jen Lemanski, and I’m back again with Nicole Riley, an Audit Director and one of the faces of the PKF Texas not-for-profit team. Nicole, welcome back to the playbook.

Nicole: Thanks. Thanks for having me.

Jen: There’s different departments in a not-for-profit organization. Two of the main ones are finance and development. Why is it important for those two to be collaborative?

Nicole: Internal collaboration at a nonprofit is always important just because you want a team morale. First and foremost, you want everybody to be on the same team when everybody is there for the same mission. So, of course it’s good for collaboration just for the overall well-being of an organization, but it’s also really important because accurate financial statements can, you know, is important to the organization and that can fall through the cracks when these specific two departments don’t talk. When they’re not communicating, the development department might know of a contribution that’s coming that finance does not, and it could be a big one that needs to be recorded. And then you have revenue and contributions recorded in the wrong period. So that’s one big reason.

Jen: Especially if it’s a restricted gift, you know, that could have all sorts of consequences if they don’t use it, right?

Jen: So, what are some ways that they can collaborate effectively?

Nicole: First and foremost, clear communication is important, whether that be a meeting every week, every month, you know, just those two getting on some kind of schedule to talk about it. And having a policy in place and procedures in place to make sure that development communicates the awards and finance makes sure that they’re talking back as well.

And then the other key thing I say is having reconciliations between the donor database and the accounting software to make sure that everything that the development department has coming in and has said that we have, the accounting department also is aware of it. And whether it’s recorded or not, at least there’s a reconciliation to go from one to the other. Not only for all the reasons we already said, but also making sure that all the donors’ donations are making it to accounting, too, so it’s a little extra fraud prevention as well.

Jen: How often do you recommend that they do that reconciliation between the two?

Nicole: At least, I would say once a month, Really that’s a key, because if you get too far beyond that it can be a little cumbersome and overwhelming to try to do the whole year and doesn’t actually have the benefits that it does. So, once a month is really key.

Jen: Perfect. Well, we will get you back to talk about some more topics impacting not-for-profits.

Jen: For more information about this topic, visit www.pkftexas.com/NotForProfit. This has been another thought leadership production brought to you by PKF Texas – The Entrepreneurs Playbook®. Tune in next week for another chapter.