The SECURE Act – What You Need to Know 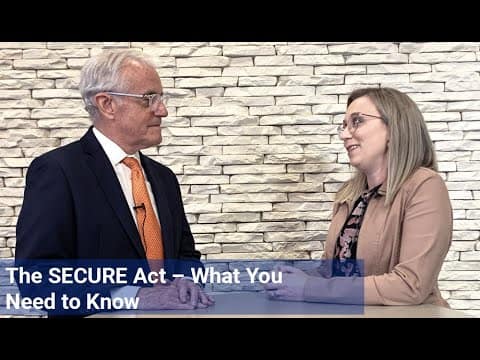 Russ: This is the PKF Texas Entrepreneur’s Playbook. I’m Russ Capper, this week’s guest host, and I’m here once again with Kristin Ryan, Audit Senior Manager and one of the faces of PKF Texas’ employee benefit plan team. Kristin, welcome back to the Playbook.

Kristin: Thank you. Glad to be here.

Russ: Okay, so, I understand we’re going to talk today about the SECURE Act?

Kristin: That’s right. So, the SECURE Act has been a big buzz lately. It was signed on December 20th by the President, and the over-arching goal is to encourage participation in plans and retirement savings.

Russ: Well, I always think the way to encourage participation is have company matching funds. Is that right?

Kristin: Absolutely and that hasn’t changed, but some of the things that have changed for a Defined Contribution—or as we refer to them, DC plans, which are 401(k) plans—typically are the biggest one that I’m hearing about and rightfully so as the Open Multiple Employer Plans or MEPs. So, historically that’s only been available to companies that were related or had a similar commonality, but now that’s being opened up to other employers. So, we’re going to see a lot more employers joining these, and it’s going to result in cost savings for them, some scaling and sharing and fiduciary risk.

Russ: Okay, so, joining—does that mean employees from really other companies can come together?

Kristin: Right, in the same plan.

Russ: Wow, there should be lots of benefits and doing that.

Russ: I mean, for the company and employee.

Kristin: The downside, though, to that is the lack of tailoring that they can then do, that they were able to do in their own plan is the only thing that we’re going to see. We’re probably expecting most of our clients and most in the industry to stick with their own plan and not join a Multiple Employer Plan, but it is a good option for smaller companies that need that cost savings and need to have a plan that’s already designed.

Russ: Okay, so, is the lack of being able to customize it mainly just because it’s a bigger group and the group all has input?

Kristin: Yeah, it’s going to be more of a cookie-cutter type plan.

Russ: Okay, anything that you left out that we need to bring up?

Kristin: There is a lot with this one for 401(k) plans specifically. One thing is required minimum distributions can now be taken out at 72 instead of 70 ½, so they can wait a little bit longer before they take those out. They have removed the age requirement on IRA contributions, so now as long as you’re still working, you can take those contributions beyond that age. They have increased the auto escalation cap from 10% to 15%. They’ve made lifetime income or annuities more accessible to 401(k) plans now; historically it’s been more of a pension plan type vehicle, but now they’ve taken away some of the liquidity restrictions so that’s going to allow for those to be 401(k) options. And then lastly one thing I wanted to mention was the long-term, part-time employees have historically been excluded from most plans. Now, if they’ve been with the company for three years and they meet certain criteria, then they are allowed to participate in the plan.

Kristin: Absolutely. You’re going to hear a lot more about it.

Russ: Okay, thanks a lot, Kristin.

Russ: For more information about this topic, visit www.pkftexas.com/BenefitPlanAudits. This has been another Thought Leader production brought to you by PKF Texas the Entrepreneurs Playbook. Tune in next week for another chapter.