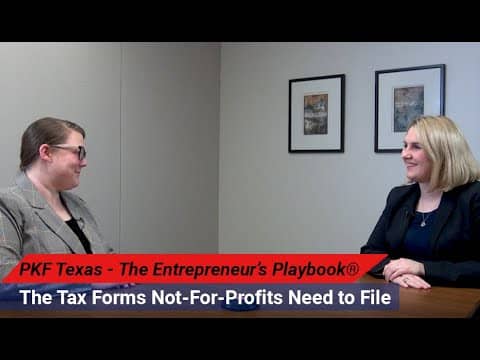 Jen: This is The PKF Texas – Entrepreneur’s Playbook®. I’m Jen Lemanski, and I’m back again with Emily Smikal, a Tax Director and one of the faces of the PKF Texas not-for-profit team. Emily, welcome back to the Playbook.

Emily: Thanks. Glad to be here again.

Emily: Your suspicion is correct. So, there’s a handful of different types of forms, so it is important to understand the differences, and which form your organization may be required to file.

So, let’s talk about first a few different versions of the Form 990. We’ll start with the 990-N, because that’s the easiest, the less burdensome one, and we call that the postcard and that’s because it’s very short; it just asks a few questions.

Emily: Exactly. And organizations that have $50,000 or less in annual revenue are allowed to use the 990-N.

Jen: Every not-for-profit organization will fill out at least one of these three forms, correct?

Jen: Is it something where they would potentially file both the regular 990 and the PF?

Jen: Are there any other forms?

Emily: There’s one more I’d like to mention, and that’s a Form 990-T. So, if an organization has $1,000 or more of unrelated business income, which we’ve talked in more detail in other videos, then they have to also file a Form 990-T to report that. So, all the other forms that I mentioned earlier are required to be filed annually in order to keep up their good status with the IRS, but the Form 990-T is only required if it meets the threshold of the $1,000 for that year.

Jen: Perfect. And it sounds like we could probably help them figure out which form they need to fill out.

Emily: Absolutely. That’s what we’re here to help with anytime you’re questioning which approach to take; we’ll help you walk through that.

Jen: Sounds good. Well, we’ll get you back to talk a little bit more about tax stuff for not-for-profit. Sound good?

Jen: This has been another thought leadership production brought to you by PKF Texas – The Entrepreneurs Playbook®. For more information about this topic, visit www.pkftexas.com/NotForProfit. Tune in next week for another chapter.