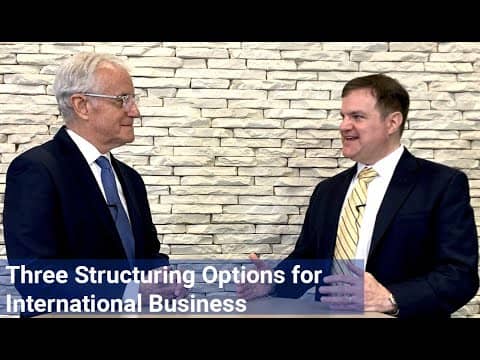 Russ: This is the PKF Texas Entrepreneur’s Playbook. I’m Russ Capper, this week’s guest host, and I’m here once again with Frank Landreneau, a Director and one of the faces of the International Tax team here at PKF. Frank, welcome back to The Playbook.

Russ: Our last time together, we got into the Tax Cut and Jobs Act, and of particular interest to me was how the interpretation of how you handle certain things from that Act has sort of evolved and matured and maybe even changed over time now that we’re in it two years. There was one particular—I had asked you to give me an example of how that rolls out, and you said, “Yeah, there’s this one part of running an international business, where there’s, like, three options that have evolved, really.” Mainly, from international tax people like you. One was literally to create a corporation and, correct me if I’m going down this path wrong, but one was to create a corporation.

Russ: The second one was to actually elect a holding company that would play like it was the company.

Russ: And the third, mostly I guess for SMEs, was to actually create something that you’re just treated like a foreign company. Was I even close on those three?

Frank: Very close, actually. In tax law there is a lot of elections that create a tax treatment that may not be in line with legal structuring and so forth.

Russ: Yeah, you want to avoid that legal stuff, don’t you?

Frank: That’s right. Probably what makes sense is to go through each one. As we’ve talked about, a lot of the Tax Act favors regular, domestic corporations. It really had multinational U.S. companies in mind, really to not have those large entities keep large, you know, trillions of dollars outside the U.S., as we saw with the drug companies. To bring that back and not have tax structuring dictate the lack of investment in the United States. That was really kind of the—the focus was really on these large guys. But what about the little guy? What about the individual entrepreneur that make up primarily the job creation in the country and your audience? And the answer was it really kind of left a lot of these people out.

And so, what we’re kind of left looking at is, what are the structuring options? Since we know, we talked about last time, tax deferral strategies; in other words, having foreign operations not be taxed until they bring back the money in a form of repatriated payment—i.e. dividends—is off the table, primarily because of the Global Intangible Low Tax Income provisions, otherwise known as GILTI. What does an entrepreneur do? One logical explanation would be: well, let’s treat these foreign enterprises as if they were owned by a U.S. holding company. One way to do it is to simply just do that: create one and then transfer your interest in foreign corporations to that U.S. business.

And then continuing that flow-through treatment for U.S. activities but have the C corporation be a blocker entity for your foreign enterprises. And so, while there are advantages to that, because C corps get a 21% tax rate, you get to basically cut your GILTI inclusion in half, and then you get the ability to take foreign taxes as a credit against your U.S. tax liability.

There are also disadvantages. If you have high-value or appreciating property in the C corporation as a result of moving your businesses there, then you’re subject to double taxation. So, there are advantages and disadvantages you’ve got to look out for.

There is an election called a Section 962 Election, which has been around for a while. It hasn’t been used for almost 50 years, because there hasn’t been this period of time where there is such a disparity between the individual tax rates and the corporate tax rates. We haven’t seen that since the 1960s, since the Kennedy Administration. And so, now that’s occurred, this election has become revised. And it works like this—where on an annual basis you can treat the taxation of your foreign earnings as if it were earned by a regular corporation.

That gets you the GILTI deduction, which essentially gets you to have that GILTI inclusion, and then you get to get the foreign tax credits against the U.S. tax liability. That’s all good, but what happens when you repatriate that income? When you repatriate that income, to the extent that you hadn’t paid tax before, you pay tax again. That’s where a lot of our clients say, “Well, we don’t like that.” If you’re doing business in a treaty country, that actually is not such a bad result, because you pay so little tax, most likely, when you make the election, when you repatriate it back, you typically get the capital gains rates on that repatriation. So, you still end up with a relatively low tax rate.

Russ: These options are just sort of evolving over this two-year period, because international tax experts like you have figured them out, or has there been actually a government interpretation that says, “Well, you could do it this way.”

Frank: That’s exactly—with respect to the last item, the second option, making this so-called 962 Election, there are a lot of questions about—since you’re treated as if you were a C corporation, but you’re not, you’re not technically a regular corporation—would you still get this deduction, which basically cuts the inclusion of foreign earnings in half, effectively getting the corporate… Basically it’s a 10.5% tax rate. That wasn’t clear before. Now we’ve gotten guidance that makes it—

Russ: But there’s the third way to also pursue a solution to this problem, right?

Frank: That’s right. If you’re working in non-tax treaty countries, like many of our folks do, like Singapore or much of Latin America. There’s a treaty with much of Latin America, or even in some cases countries in the far east where you cannot get the capital gains rates when you repatriate the funds under option two. The third option is just to be flow-through worldwide. In other words, your dream business is a partnership, or an S corporation and you’re not being taxed twice, the entity is not being taxed, the individual is being taxed. Why not have that structure worldwide?

Unfortunately to get there, you have to do an actual—or a deemed liquidation, typically—a deemed liquidation by making election to treat those entities as foreign branches. That’s a taxable event. It would be like selling your stock of your foreign subsidiaries. Can you afford to do that? And what’s the value of those foreign subsidiaries? And can you afford to pay the tax on that gain? And that would be a reason why people would not take option number three.

Frank: You sit tight and pay the GILTI tax to the extent you can, but I think long term that’s really not an option. I think you probably would be looking to either do one or two if you couldn’t do three.

Russ: Okay, well, it’s always interesting, and it totally affects me how complicated this stuff is, and it reminds me that we’re going to try to keep doing this in this series with you.

Frank: That’s right. It should be a change from the Tax and Jobs Creation Act to the Tax Accountant and Lawyers Employment Security Act.

Russ: That’s right. No kidding. Thanks a lot for being here once again, Frank.

Frank: My pleasure. Thank you.

Russ: You bet. To learn more about other international topics, visit PKFTexas.com/InternationalDesk. This has been another Thought Leader Production, brought to you by PKF Texas – The Entrepreneur’s Playbook. Tune in next week for another chapter.