How to Persuade Donors to Remove “Restricted” from Gifts

Restricted gifts — or donations with conditions attached — can be difficult for not-for-profits to manage. Unlike unrestricted gifts, these donations can’t be poured into your general operating fund and be used where they’re most needed. Instead, restricted gifts generally are designated to fund a specific program or initiative, such as a building or scholarship fund. 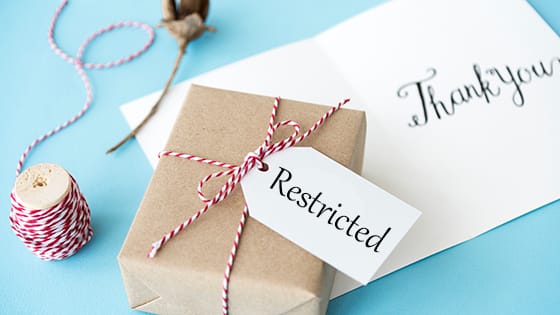 It’s not only unethical, but dangerous, not to comply with a donor’s restrictions. If donors learn you’ve ignored their wishes, they can demand the money back and sue your organization. And your reputation will almost certainly take a hit. Rather than take that risk, try to encourage your donors to give with no strings attached.

Personal Touch
Some donors simply don’t realize how restricted gifts can prevent their favorite charity from achieving its objectives. So when speaking with potential donors about their giving plans, praise the benefits of unrestricted gifts. Explain how donations are used at your organization, offering hard numbers and examples where needed. Be as upfront as possible and give them as much information as you can about your organization.

To make unrestricted giving as easy as possible, give donors (and their advisors) sample bequest clauses that refer to the general mission and purpose of your organization. Also encourage them to include wording that shows “suggestions” or “preferences” for their donations, as opposed to binding restrictions. Prepare documents that give wording samples for these cases.

Words of Intent
Unless you’re holding a fundraiser to benefit a specific program, include general giving statements in your fundraising materials. For example, you might say, “All gifts will be used to further the organization’s general charitable purposes,” or, “Your donations to this year’s fundraiser will be used toward the continued goal of fulfilling our organization’s mission.”

Reinforce this message in your donor thank-you letters. They should state your nonprofit’s understanding of how the gift is intended to be used. For example, if a donor stipulated no restrictions, explain that the money will be used for general operating purposes.

Gentle Persuasion
Obviously, you’ll need to be respectful if a donor is determined to attach strings to a gift. (Before accepting it, just make certain you’ll be able to carry out the donor’s wishes.) But if you can persuade contributors that their gifts will be used in a responsible and mission-enhancing way, many are likely to remove restrictions.